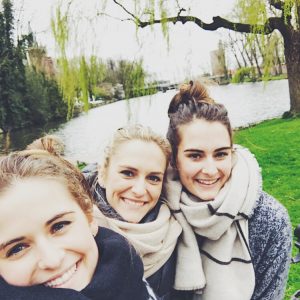 If you’re anything like me and my sisters, you may have never even heard of Brugge before. But let me tell you. It’s an absolute must see.

While on our Parisian adventure, we knew we wanted to do a few day trips that were in close proximity to Paris. So, we started doing a little research and found that Brugge, Belgium is only a 2.5 hour train ride. We were sold for a few reasons: 1) The pictures looked as if we would be transported to a Disney fairytale. 2) We’ve heard a time or two Belgian chocolate, waffles and beer are on point. 3) Belgium is another country we could add to our “visited” list.

So, with our train tickets and passports in hand, we traveled to what is now one of my favorite places I’ve been. 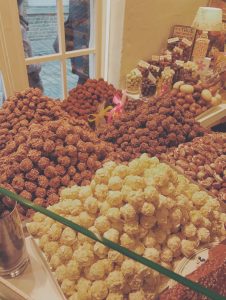 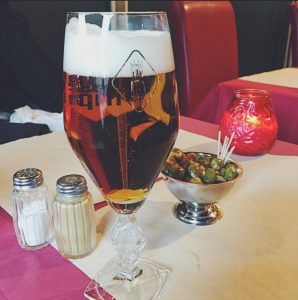 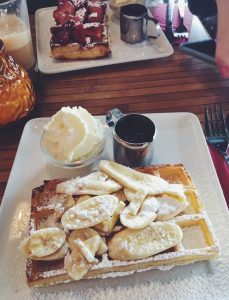 You guys. The Belgians don’t mess when it comes to food. Being the food lovers that my sisters and I are (I’m sure you’re starting to see a theme here), we of course had to try the chocolate, waffles and beer that everyone rants and raves about (twist our arms). All I can say is that they were everything we’ve heard and more. 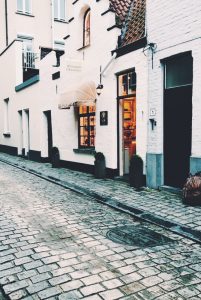 We started the morning with chocolate because it’s never too early for that. We stopped at a shop called called Artisanale Chocolatier and were in heaven. The smell was deliciously fragrant, the shop owner was so incredibly sweet (no pun intended),
and the chocolate did not disappoint. We tried out a few other chocolate shops throughout the day which were still quite delicious, but we kept finding our way back to this particular shop for more. I recommend trying multiple kinds, but my vote goes to the truffles. They were life changing.

We then ventured further into the center of the city (the Markt to be specific) where we found a fun place to get coffee and Belgian waffles of course. Abigail and I treated ourselves to the whipped cream, chocolate sauce and banana waffles, while ash went with the strawberries. I’d say they were a tie – for absolute best waffles I’ll probably ever have in my life. 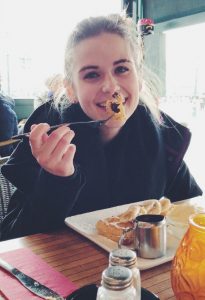 We of course continued to eat all throughout the day (we’re Graham’s and it’s what we do), but shortly before catching our train, we finished the day with an ice cold Belgian beer and french fries (apparently french fries and mayonnaise is the way to do it in Brugge, but we skipped the mayo because Abigail has a serious phobia of it). We went with the basic local beer, but there was nothing basic about it. It was a bit hoppy, but not too hoppy. Light, but not too light. It was just perfect. Even Ashley agrees and she doesn’t even like beer. I loved it so much I had to get a sweatshirt to remember it by.

TOUR THE CITY BY BOAT.

Brugge is often called the Venice of the North because of the series of canals that run all throughout the city. Similar to Venice, tourists can see the city by boat (motor boats instead of gondolas of course). For only 8 euro per person, the 30-minute boat rides take you all throughout the city. With tour guides that speak multiple languages we learned all about the history of Brugge, the various landmarks, and more. Not only did we enjoy being out on the water, but we loved getting to see what areas of the city we wanted to go back to to explore by foot. 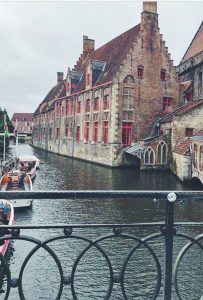 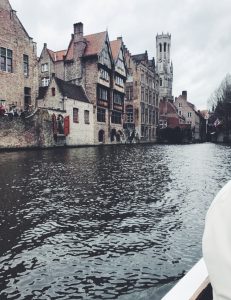 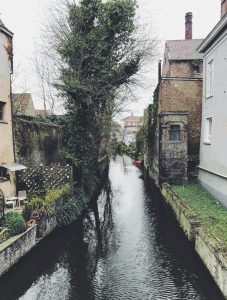 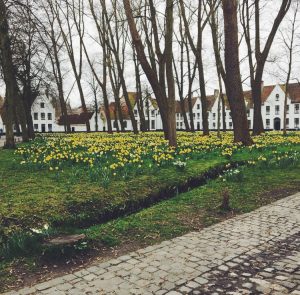 While exploring the city, we stumbled upon “The Princely Beguinage Ten Wijngaarde,” once the home of the benguines (emancipated lay-wo 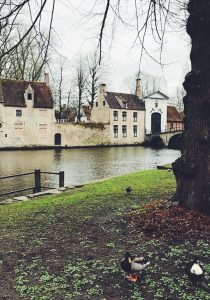 men of 1245). Today, it’s home to nuns of the Order of St. Benedict. The grounds were ever so serene with the houses painted in all white, daisies covering large open areas, and tourists quietly observing the grounds. There is also a museum tourists can visit; however, we ran out time. Regardless, I highly recommend at least stopping in to see the grounds. I guarantee you’ll feel a sense of peace.

VISIT THE CHURCH OF OUR LADY. 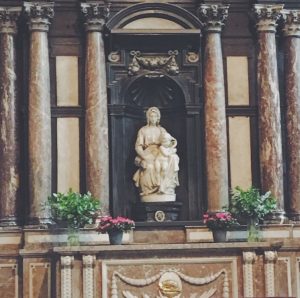 Apparently not many people know this, but The Church of Our Lady in Brugge is home to Michelangelo’s Madonna and Child sculpture. Originally stolen by soldiers in both the French Revolution and in World War II, it was later found an 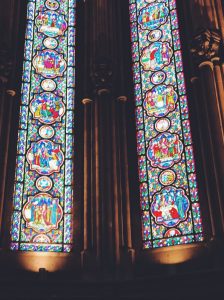 d returned to Belgium. If you’re into art, this is a must see.

The Church of Our Lady also boasts Ceremonial tombs of Mary of Burgundy and Charles the Bold, as well as stained glass windows and other beautiful paintings. With it’s 122-meter brick steeple, the church itself is also quite beautiful (although if you’ve been to Italy I do admit nothing quite compares).

PEOPLE WATCH (AND EAT SOME MORE) IN THE MARKT.

The Markt is – in 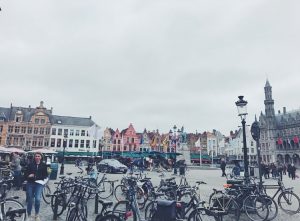 my opinion – the place to be. It’s the center of the city and is lined with restaurants, shops, two museums, and a bell tower. Most of the restaurants offer outside seating where you can sit and watch the large number of tourists take in the city by foot or by horse drawn carriage, and eat and drink (like we did) until your heart’s content.

And on Wednesday mornings we were told there is a weekly market where residents sell everything from cheeses, meats, fruits, and vegetables to flowers, breads, and other pastries. Unfortunately, we weren’t in Brugge on a Wednesday – but it’s probably a blessing in disguise or else I would have spent all my money.

SIMPLY EXPLORE THE CITY BY FOOT.

This probably goes without saying, but simply spend a few hours wandering through the streets of Brugge. It’s one of our favorite things to do – taking in the architecture, the one-of-a-kind shops, the delectable treats, and chatting with the locals (they speak fantastic English). It’s how we stumbled upon many of the “to-do’s” I list above. When you’re wandering without a mission, it allows you to take in the culture and appreciate a different way of life. This city is laid-back, yet full of friendly people that are passionate about what they do – something I know I can certainly learn from. 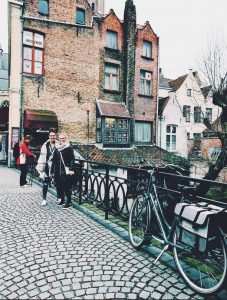 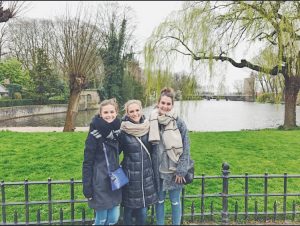 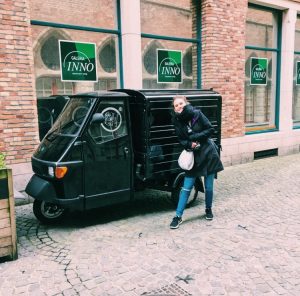 With that, pretty please do yourself a favor and visit the city of Brugge. Because if they’re doing chocolate, waffles AND beer right, they’ve gotta be doing a number of other things right too.